South Carolina Political Collections chiefly documents government and society in the post-WWII era, but a number of our collections include materials from WWI.

World War I, also known as the Great War, lasted from 1914 to 1918. Originating in Europe, the fighting spread globally. On April 6, 1917, the United States joined the Allies of Britain, France, and Russia to oppose the Central Powers of Germany and Austria-Hungary with Italy.

2018 marked the centenary of Allied victory and the end of the War. 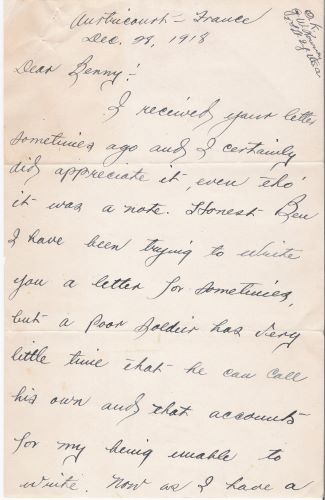 A wartime letter from Solomon Blatt, 1918 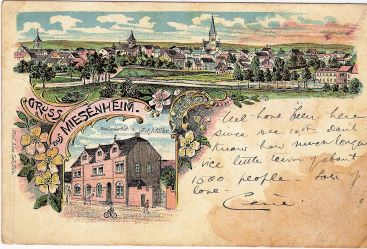 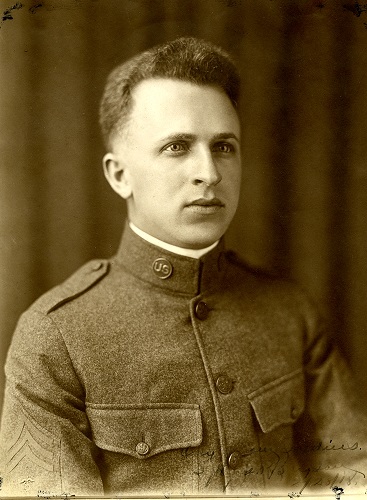 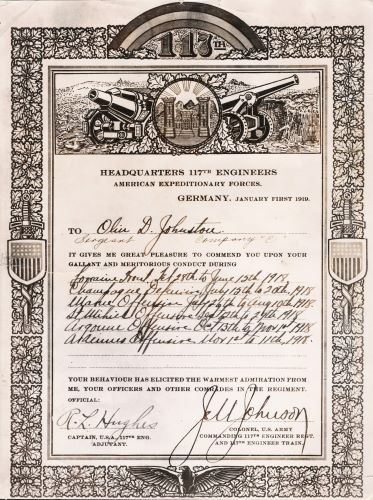 A commendation from the American Expeditionary Forces to Olin D. Johnston, 1919

Although originally found physically unfit for military service, Blatt was eventually sent to France after appealing to then-Congressman James F. Byrnes for a waiver. He served with his regiment there until early 1919.

Bryson served in the U.S. Army ambulance service and, after the war, held a commission in the Infantry Officers Reserve Corps until 1934.

He went on to represent South Carolina's Fourth District (Greenville-Spartanburg) in Congress from 1939 to 1953.

Box 7. Contains Bryson's military portrait and photographs of him at Fort Oglethorpe, Georgia, in 1918.

Workman is perhaps best remembered for his competitive campaign for the U.S. Senate as a Republican in 1962 when the Democratic Party dominated South Carolina. Although he was too young to fight in WWI, service records of Workman's father-in-law, Heber Thomas, are included in the collection.

Box 19. Includes an extensive series of letters between Workman's wife Rhea's parents, Heber Thomas and Ruth [Dorrill] Thomas during WWI. Thomas served as a private in the army, and his unit was sent overseas in August 1918.

Gasque represented South Carolina's Sixth District in Congress from 1923 to 1938. He served as Secretary of Education, Florence County, 1902 to 1923 and on the Democratic State Executive Committee from 1912 to 1920. As a member and later chairman of the Pension Committee, he worked for veterans and widows and their children affected by WWI.

Johnston enlisted in the Army National Guard in 1917 and served with the 117th Engineer unit, attached to the 42nd (Rainbow) Division. He served eighteen months overseas and attained the rank of sergeant.

Box 146. Has a folder on the Rainbow Division.

Wyche served with the 4th Infantry, American Expeditionary Forces of the U.S. Army, and attained the rank of Major.

He went on to serve as the U.S. District Judge for the Western District of South Caarolina from 1937 to 1966.

Box 4. Contains records relating to his military career including appointments and transfers, 1917-1918.

Wickenberg was a journalist for 40 years, primarily with The State in Columbia, South Carolina.

Although he did not fight in WWI, Wickenberg's father did. A number of letters from C. Herbert Wickenberg (1895-1988) include correspondence with his mother during his service in France, 1918. By early 1919, he was serving in the Headquarters Detachment of the American Peace Commission in Paris.

Box 3. Contains a number of these wartime letters including Charles' transcriptions, some annotated.